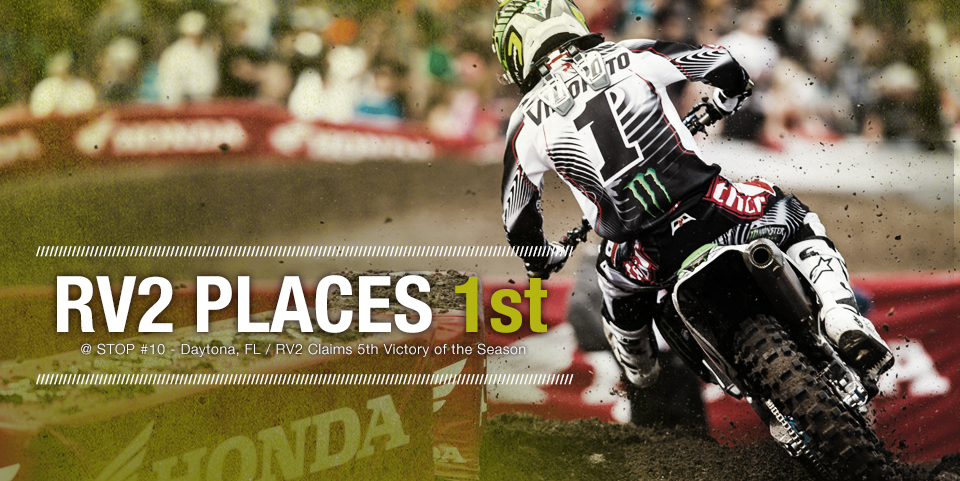 Two weeks following the Daytona 500 at the historic Daytona International Speedway in Daytona Beach, Fla., Monster Energy AMA Supercross took over the infield. Monster Energy Kawasaki’s Ryan Villopoto captured his fifth main event win on the grueling, unique track and claimed the points lead for the first time this season. Monster Energy/Pro Circuit/Kawasaki’s Dean Wilson was the fastest rider in the 250SX class and battled to fourth place, while teammate Justin Hill came through the pack to finish strong in sixth. Monster Energy Kawasaki’s Jake Weimer recovered from a crash to finish 13th.

After cutting his points deficit in half last weekend with his win in St. Louis, Villopoto was excited to come to Daytona. Posting the fastest lap time in qualifying, he went into the night show and finished second in his heat race. As the gate dropped for the 20-lap main event, Villopoto grabbed the holeshot on his KX™450F, but ran off track briefly, loosing a few positions. He was able to overcome the ever-changing track conditions and reclaim the lead. Villopoto steadily put in consistent laps and took the checkered flag for the fifth time this year, marking his third win in Daytona. 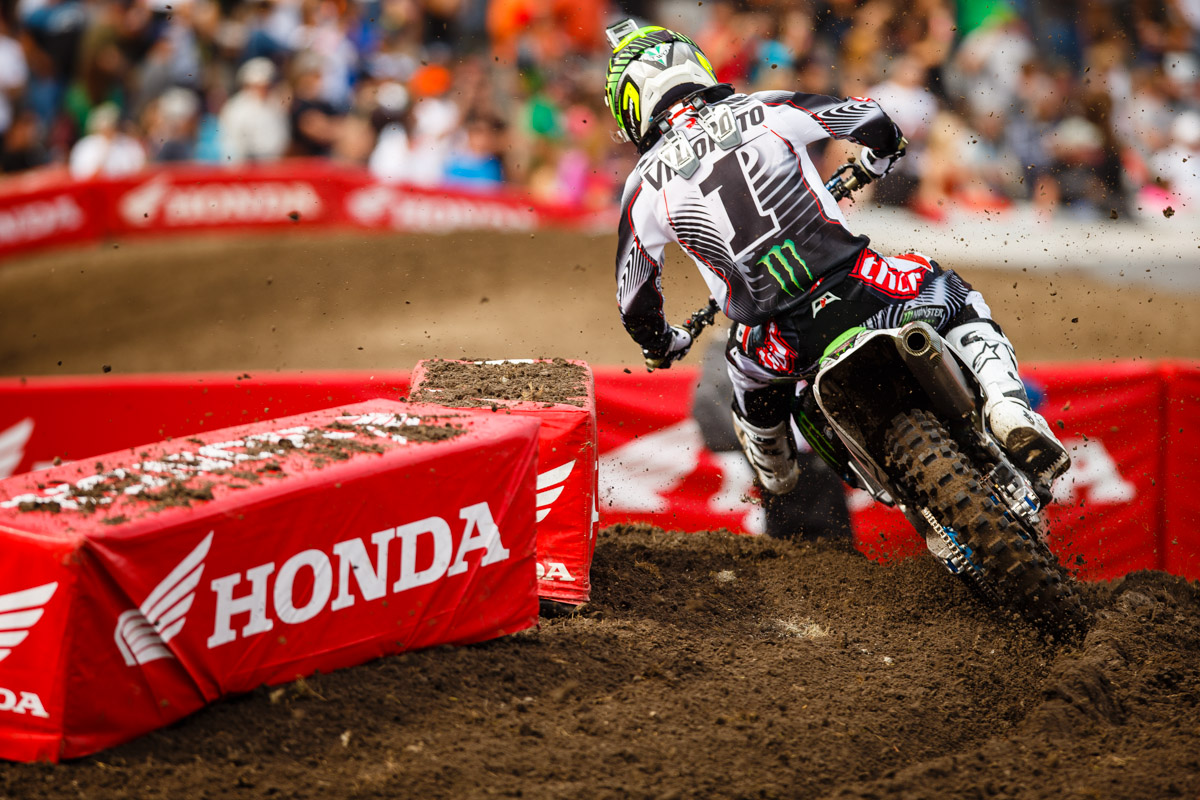 “We’re in a good place,” said Villopoto. “The track was so tough tonight, you just had to keep on your toes and be ready for anything. We didn’t expect to be back in the points lead this fast, but from here we will try to keep the wins coming.”

Week after week Wilson has been the fastest qualifier by large margins. Daytona was no different as he set the fastest time in practice on the outdoor-inspired supercross track. Wilson got off to a top-five start and wasted no time getting to the front in his heat race. He took the win and had first gate pick for the main event. In the main event, Wilson got another great start aboard his KX™250F and moved in behind the leader. He was reeling in the leader until he mistimed a rhythm section and came up short on one of the jumps. Shaken up, Wilson was able to hang on to finish fourth and sits second in the points standings, just five points behind the leader.

“I felt great all day,” said Wilson. “I was fast in practice, but never quite felt the same once the lights came on for the night show. After I came up short in one rhythm section, I just tried to regroup and get through the race. The track was very difficult” 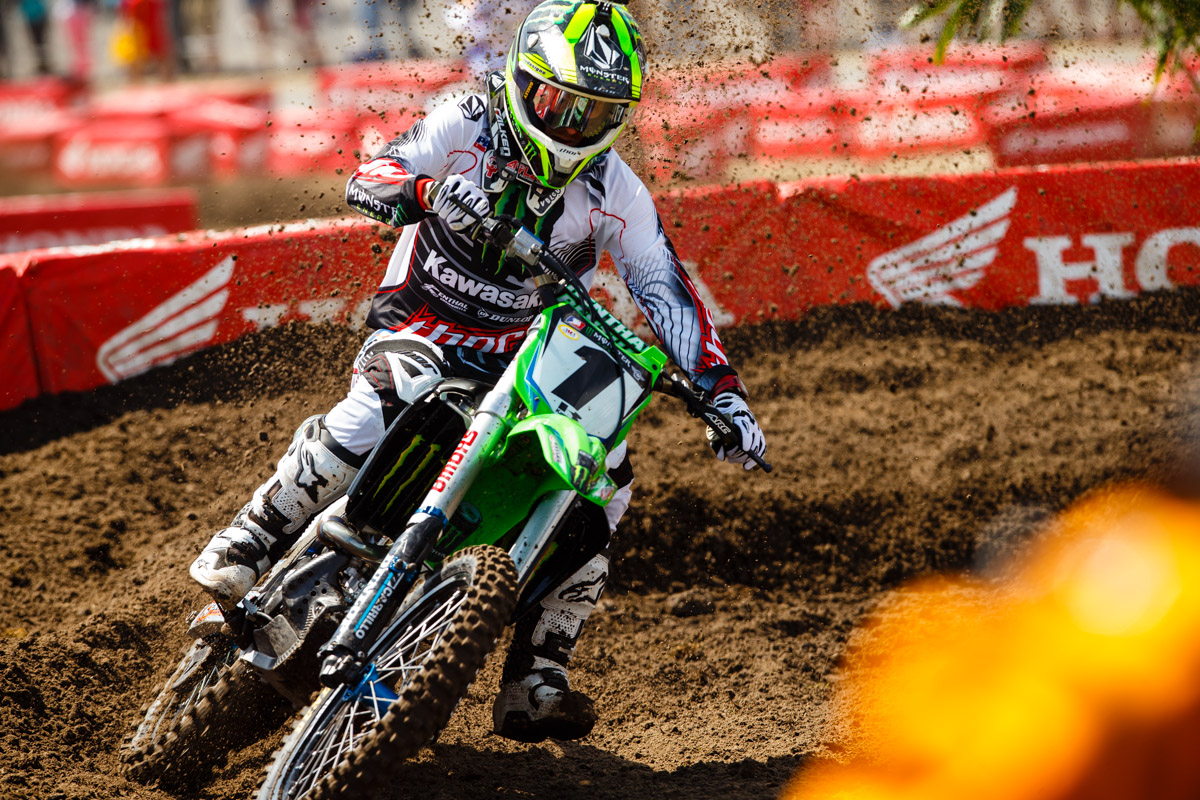 It took Hill until the last practice of the day to really start to feel comfortable on the Daytona track. The rookie qualified seventh and had a strong showing in his heat race. In the main event, Hill started just outside the top-10 and progressively started picking off riders. By the end of the treacherous 15-laps, Hill climbed to sixth place.

“I’m happy with how we finished tonight,” said Hill. “Today was really tough. I didn’t feel comfortable in practice, but as the night progressed I started to get into a groove. I still feel like I have a podium in me so we’ll move forward to next week.” 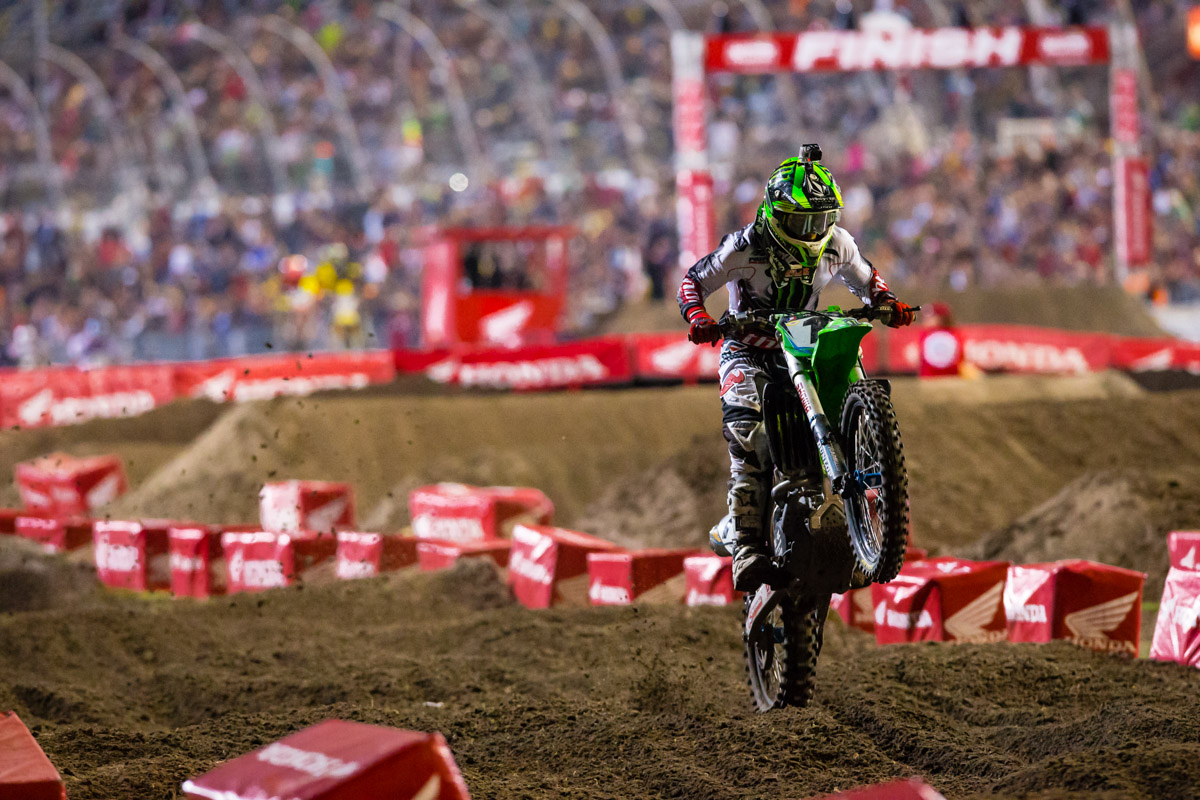 Weimer has been working his way back into race form since sitting out a few rounds. In Daytona he had a strong heat race and battled to finish sixth. In the main event, Weimer was pushed off the track in the first turn and was forced to fight from behind. He had made up multiple spots by the halfway mark until a small tip-over dropped him back again. With long laps remaining, Weimer pushed hard to climb back to 13th.

“I never quite felt like myself,” said Weimer. “I would feel fast in one section, but would mess up another and just could never put a solid lap together. The track was super rough so it was hard to push because it was so sketchy. We’ll regroup for next weekend.”

The long track at Daytona not only gave riders ample opportunity to make up ground on their competitors but it also brought the fitness element of supercross into play. With laps averaging nearly 90 seconds, the 450SX main event lasted more than 27 minutes, highlighting the fitness levels of the series top riders.

Although known for car racing, Daytona International Speedway has a long history with supercross. Daytona has been home to the original supercross since 1971, making it the longest continuous supercross event in America.

After 10 rounds, Villopoto will head to Indianapolis, Indiana sporting the red number one plate at Lucas Oil Stadium to distinguish him as the points leader. He has not held the red plate since the season kicked off in Anaheim this past January. 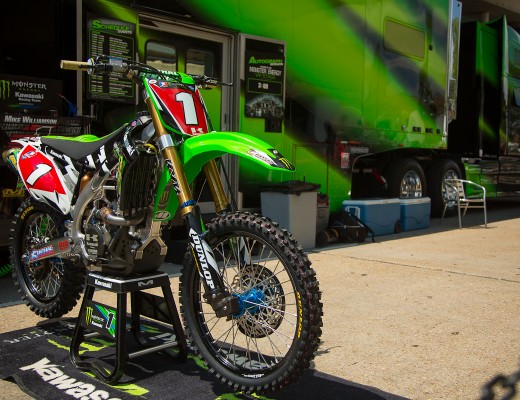 Villopoto Takes Back the Points Lead in Dallas 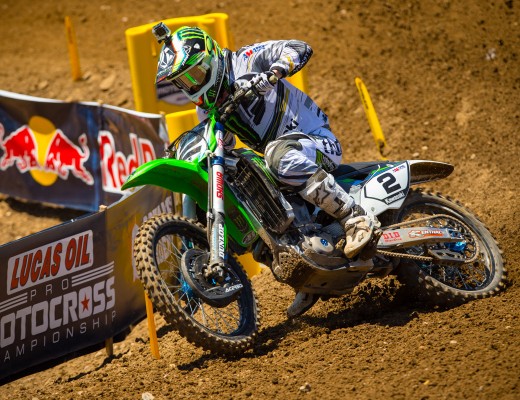