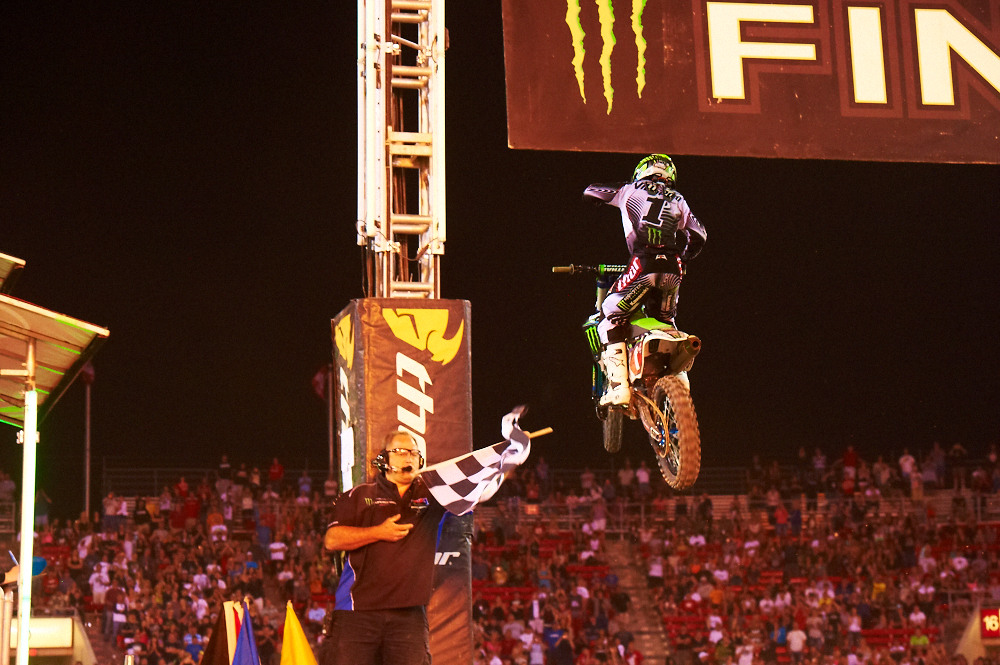 Monster Energy Kawasaki’s Jake Weimer started the 450SX Class with the Nuclear Cowboyz® Holeshot Award. Villopoto rebounded from a mid-pack start to take over the lead from his teammate Weimer at the end of the opening lap. Villopoto led from wire to wire en route to the victory.

“This is a great way to cap the season off,” said Villopoto. “We rebounded this year from a bad start at the season opener and won the title. There is no better way to end a season than like this.”

In the Eastern Regional 250SX Class Main Event, Gavin Faith won the Nuclear Cowboyz Holeshot Award, leading Hahn through turn one. After the opening lap, Bowers moved into second place before taking over the lead on Lap 2.

Hahn secured the number-two position on Lap 5, and on the same lap, Red Bull KTM’s Marvin Musquin, who came into tonight’s race five points behind Hahn in the championship standings, moved into third place.

“Right now, I do not know what to say,” said Hahn. “Marvin [Musquin] has been making a string comeback on me, and coming into this race, I may not have been in the most ideal situation, but I am glad I pulled it off.”

“This was an amazing race for me,” said Bowers. “I had a great AMSOIL Arenacross season and come into supercross ready to put in some good races. This is the perfect way to close out the season.”

On lap 4, Roczen advanced to second place as Davalos controlled the lead. Tomac made the best of his sixth place start and began working his way through the field, passing Roczen on Lap 9 and Davalos for the lead on Lap 11.

“I am so happy right now,” said Roczen. “This was a close race tonight and the championship was intense. I really hope that the fans enjoyed tonight’s race. I was riding with a lot of weight [on my shoulders], but I am so excited right now.”

“It was a year of ups and downs,” said Tomac. “This is going to make me better as I make the transition to the 450SX Class next year.”

Newly crowned champion Roczen opened the Dave Coombs Sr. East/West Shootout with the Nuclear Cowboyz Holeshot Award followed by his teammate Musquin. At the end of the opening lap, Musquin moved into the lead, and on the following lap, the two traded places several times before Roczen made a pass and rode to the first shootout win of his career.

MyPlash Yamaha’s Kyle Cunningham passed Musquin for second place on Lap 5 and rode to the best finish of his career.

“This race was really important to me because this is my last 250SX race in supercross because I am moving up next year,” said Roczen. “This is my first shootout win and it feels great.”