HOUSTON, Texas. (February 12, 2011) – A huge crowd of 45,859 fans filled Reliant Stadium on Saturday night for the sixth race of the 2011 Monster Energy AMA Supercross, an FIM World Championship, season. After wild night of action that resulted in a shakeup in the points, American Honda’s Trey Canard, of Shawnee, Okla., captured his first career Supercross class victory. In the opening race of the Supercross Lites Eastern Regional Championship, GEICO Honda’s Justin Barcia, of Ochlocknee, Ga., raced to the win in the 15-lap main event.

As the 20 riders in the Supercross class main event converged on the first corner, a melee ensued, collecting Supercross points leader James Stewart, of Haines City, Fla., and his San Manuel Yamaha as well as TwoTwo Motorsports’ Chad Reed, of Tampa, Fla. Through the chaos, GEICO Honda’s Kevin Windham, of Centreville, Miss., grabbed the holeshot and led for the first half of the main event. Stewart and Reed crossed the line in 15th and 17th, respectively, following the first lap.

While leading, Windham crashed in a rhythm section and out of the race, handing the lead to Canard on Lap 10. For the remainder of the main event, defending Supercross champion Ryan Dungey, of Belle Plaine, Minn., closed in aboard his Rockstar/Makita Suzuki and actually took over the top spot for a short time before Canard fought back and fended off Dungey to take the victory.

“I don’t know what to say,” said Canard. “It was an awesome race. I just tried to hang in there, because it was a tricky track. I made a mistake and (Ryan) Dungey gained a lot of time on me and from there I was just riding defensive. We had a bit of a rough week this week, but this makes it all better.”

Dungey finished second, almost clipping Canard at the line, and rebounded from his DNF one week ago.

“(The championship) isn’t over till it’s over,” said Dungey. “There’s still a lot of racing left. We came up a little bit shy and I just have to look forward to next weekend.”

Completing the podium was Monster Energy Kawasaki’s Ryan Villopoto, of Poulsbo, Wash., who overcame a bad start of his own, crossing the line in 12th on the first lap.

“That was a tricky (first) turn,” said Villopoto. “It was super tight but I got through there. There were definitely some close moments in that race. The name of the game when you’re at the top (of the standings) is to be consistent.”

By virtue of his podium finish, Villopoto took over the Supercross championship lead.

As the gates dropped on the Supercross Lites class main event, Suzuki City’s Malcolm Stewart, of Haines City, Fla., grabbed the holeshot in his professional debut. He was quickly passed by Barcia and Monster Energy/Pro Circuit/Kawasaki’s Dean Wilson, of Menifee, Calif., who gradually pulled away from the field. The pair of sophomore riders traded the top spot on several occasions before Barcia asserted himself in the top spot and held on for the remainder of the race.

“That’s racing right there,” said Barcia. “If we didn’t put on a show, then I don’t know what will. We had a great race out there. I’m just so thankful for my whole team. Going that fast, that hard and that intense for 15 laps was crazy, but that’s what I’ve been training for.” 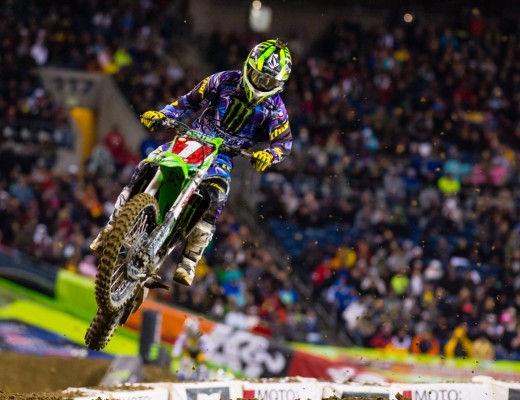 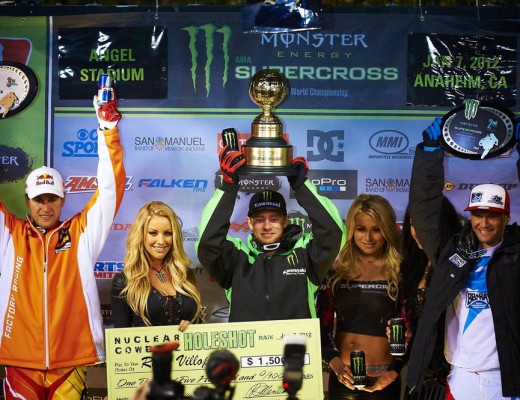