June 3, 2011
Irvine, Calif. (May 30, 2011) – Monster Energy/Pro Circuit/Kawasaki’s Tyla Rattray proved his mettle in Texas overcoming blistering heat to win the 250 class overall with a 2-1 finish at Round 2 of the AMA Motocross Championship at Freestone County Raceway in Wortham, Texas.
While the sandy track at Freestone County Raceway would prove challenging in its own right, the biggest obstacle that faced all the racers was the overbearing heat and humidity that not even a steady wind could phase. Dean Wilson came out of the gate swinging, gapping the field to win the first moto, but a third-place finish in the second moto left him in the runner-up position behind teammate Rattray. Blake Baggett got good starts in both motos, but crashes left him with a 7-16 and ninth-place overall. Broc Tickle overcame a rough first moto, going 39-5 to finish in 12th place. Monster Energy Kawasaki’s Ryan Villopoto grabbed a podium finish in the first moto, but the overwhelming heat took its toll during the second moto, leaving him with a 3-5. The finish was good enough for his second-consecutive podium finish. Jake Weimer continued to show steady improvement since his return to the KX™450F to finish 6-7 and take sixth-place overall.

When the Going Gets Tough

Rattray is a GP world champion who knows what it takes to win outdoors. In the first moto, he rode consistent and smooth to finish in second behind teammate Wilson. By the second moto, the track had deteriorated and the hot, muggy weather was at its worst. As other competitors slowed down showing signs of fatigue, Rattray demonstrated true championship spirit, charging out front to take the win. His impressive racing earned him his third-career overall win and he sits second in points for the season.

“It’s been a long time since I felt this good,” said Rattray. “Between the weather and the track, I knew it was going to be a tough race. I’ve really fine-tuned my training and am feeling like I’m in the best shape of my life. The track got super gnarly by the second moto, all the sand got pushed off to the sides of the track, which made it really rough. That second moto was really all about endurance. I know when to push and when to pace myself, and when everyone started slowing down I pushed out front. It’s great to see all my hard work finally paying off. I’m really happy with how everything went and my KX™250F was awesome. Now I’m looking forward to a little time off with the family and then go out to High Point and do it again.”

After a solid day of racing, Wilson walked away with the overall points lead in the 250 class, earning him the coveted red plate. In the first moto, he got out front early and checked out to take the win by over eight seconds. Wilson got off to another great start in the second moto, but went down after getting tangled with another racer. The crash left him fighting for position the remainder of the race. He finished third in the second moto and took second place for the weekend.

“I felt like the day went pretty good,” said Wilson. “I really liked the track out here, it was rough, but I felt like I found some good lines. I won the first moto, which I was pretty happy about. I felt like I had the second moto, but was a little too impatient. I got tangled up with (Justin) Barcia and went down. I was pretty upset with that, but picked myself up, kept pushing, and never gave up. I finished in third, which is not exactly what I wanted, but I’m happy to leave with the points lead. Going into High Point I’m just going to keep doing what I’m doing, work on my starts, and do whatever it takes to stay on top of the leaderboard.”

Since clenching the AMA Supercross championship, Villopoto’s busy schedule has left him little time to recover from an illness that has been affecting him for the last couple weeks. He came out to Freestone feeling better, but not fully recovered. In the first moto, he got pushed to the back of the field right off the start, but charged forward and worked his way through the field to finish in third place. Villopoto got a better start in the second moto, but the extreme heat and a couple mistakes would push his endurance to the limit. He continued to charge forward and finished the race in fifth place. His impressive determination left him in third-place overall, which bumped him into second on the leaderboard.

“I’m still getting back up to speed and have a few things to work on,” said Villopoto. “I didn’t have the greatest of starts in the first moto, but was able to work my way back up to third. The second moto started off good, but I pushed a little too hard and went down. The heat definitely made it harder to get back up. I know I have the speed, and my KX™450F is running great, I just need to work on some things. I’m looking forward to next weekend off so I can get things dialed-in and can come back to High Point stronger.”

Still building himself back up from an injury that kept him out of racing most of the year, Weimer has shown continuous improvement since stepping up to the 450 class. He was looking good in the Texas heat, riding smooth and consistent in both motos. Weimer finished sixth overall with a 6-7 for the weekend. His steady riding moved him up on the leaderboard into ninth place in the series standings.

“I struggled a little in practice, which left me deep in the gate picks,” said Weimer. “I’m not a big fan of this track, it seems pretty flat and there aren’t too many line choices. I got a really good start in the first moto and held onto fourth or fifth for most of the race, but got a little tired at the end and finished in sixth. The second moto I started out around fourth, but didn’t have a whole lot left after the first moto. I ended up finishing in seventh, which is not where I want to be, but it’s better than last weekend. I’m still trying to get myself back into shape from all the time off I had while injured. As long as I keep showing improvement I’m happy. I know with time on the bike eventually the wins will come.”

Working Out the Bugs

Tickle started off the day feeling good and ready to get on the podium. He got a decent start in the first moto and was running in sixth when a mechanical issue on the first lap forced him to pull off the track. Despite having the last gate pick for the second moto, he fought his way through the field to finish in fifth place. Tickle’s outstanding effort in the second moto left him in 12th place overall in the 250 class for the weekend.

“I didn’t have the best luck in first moto and had to pull off the track early,” said Tickle. “With the new format, my finish in the first moto left me with the last gate choice for the second moto. I started off the second moto around fifteenth and just put my KX250F to work. I fought hard and worked through the field into a fifth-place finish. The track is gnarly out here and it was really hot, so I felt like I did pretty good working my way into fifth from the back of the pack. We have a lot more racing to do this season, so I’m focused on getting on the podium the rest of the season.”

After taking the overall win last week at Hangtown, Baggett came out to Freestone with high expectations. In the first moto, he got off to a great start and was leading the field the first couple laps before a mistake would knock him back into 13th position. He got back on the bike and worked his way up into a seventh-place finish. The second moto he pushed hard to get out front but made a couple mistakes that left him in 16th place in the moto and ninth overall.

“It just wasn’t my weekend,” said Baggett. “I wanted to get back on the podium, and was pushing hard, but just made a few mistakes that cost me. I’m still fourth in the points so I just need to do better next weekend. There are 10 rounds left in the season so I have plenty of time to get back to the top of the points.” 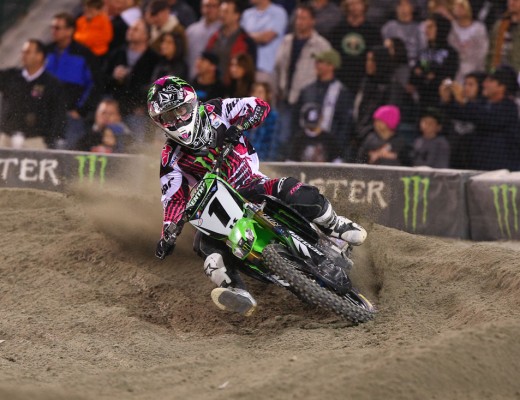 My thoughts on St. Louis