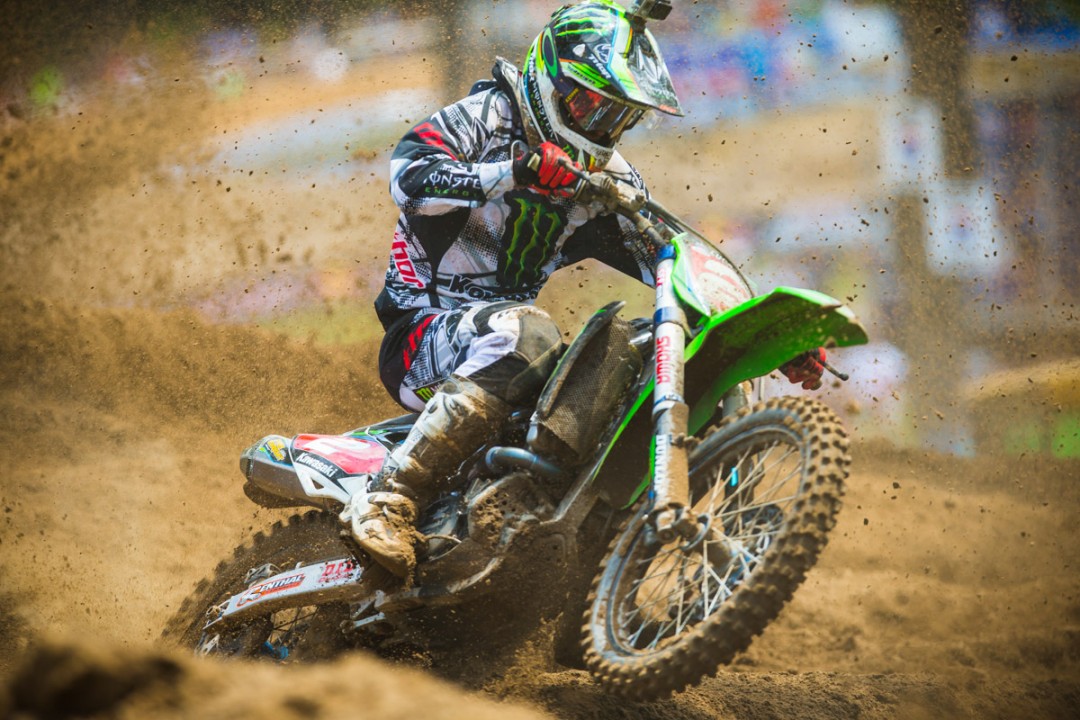 SOUTHWICK, Mass. (June 29, 2013) – After over three decades of hosting the world’s fastest riders, New England’s legendary Moto-X 338 facility hosted its final round of Lucas Oil Pro Motocross Championship, sanctioned by AMA Pro Racing, on Saturday. A massive crowd was on hand as the 2013 season reached the halfway point with the sixth round of the championship at the 35th Annual ChaplinKawasaki.com Moto-X 338 National.

After a pair of grueling 450 Class motos on one of the world’s most demanding circuits, Red Bull KTM’s Ryan Dungey secured his second straight overall victory following 1-2 moto results, gaining valuable ground in the championship standings. In the 250 Class, GEICO Honda’s Eli Tomac put forth one of his best outings of the season across each moto to also carry 1-2 moto finishes to his second overall win of the season.

As the field of 40 riders converged on the first corner in the opening 450 Class moto, it was Yoshimura Suzuki’s James Stewart who claimed the Motorcycle Superstore Holeshot Award and quickly established a comfortable margin out front. Behind him, both Dungey and Monster Energy Kawasaki’s Ryan Villopoto, the championship leader, were causalities in an incident in the first corner. Dungey emerged mid pack and climbed to 10th by the end of the opening lap, while Villopoto had to overcome an additional incident on Lap 1 to eventually cross the line in 30th. 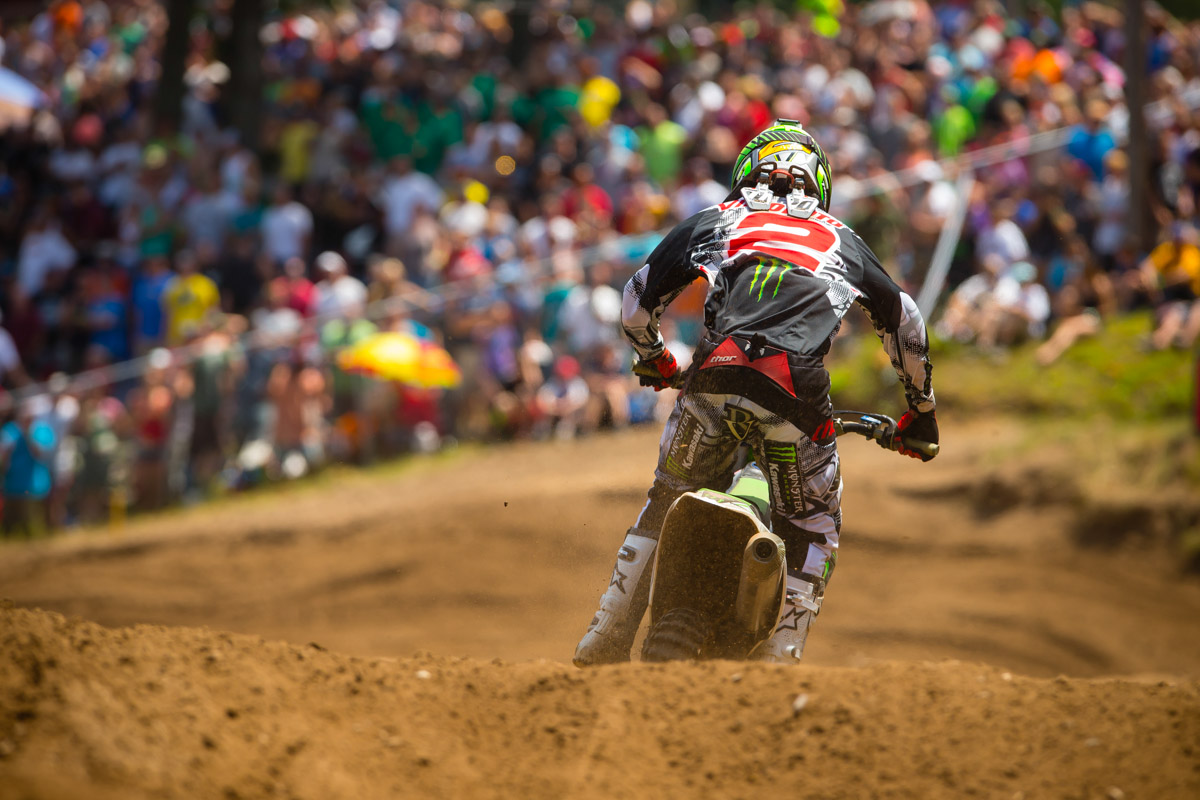 Stewart continued to extend his advantage over BTO Sports KTM’s Andrew Short in second, but suffered a frightening crash on Lap 9 that would ultimately take him out of action for the remainder of the moto. Short assumed the lead, but Dungey was on a charge through the field and made the winning pass on Short on Lap 15, just before the two-lap board. Dungey fended off a late charge from Short to take the opening win, with Team Honda Muscle Milk’s Justin Barcia in third. Villopoto battled his way back from adversity as well, passing 26 riders en route to salvaging at fourth-place result.
Both Dungey and Villopoto avoided misfortune out of the gate in the final moto to position themselves in first and second, respectively, with Dungey securing the Motorcycle Superstore Holeshot Award. It wasn’t long before Villopoto positioned himself in front of Dungey for the lead, with the pair pulling Barcia into a three-rider breakaway.

Villopoto maintained a gap of just over a second on Dungey throughout the first half of the moto, but eventually began to extend his lead as the pair encountered lapped riders. Dungey’s charges to close the gap on Villopoto helped him gain a comfortable margin on Barcia in third and secured a runner-up finish in the moto that guaranteed the overall win. Villopoto’s 4-1 performance landed him second overall, while Barcia rounded out the podium in third (3-3).

“It’s pretty cool to be the final winner here at Southwick,” said Dungey. “I grew up watching this place on TV and now I’m racing here. To be able to share this with the fans is awesome. The day was awesome. We made some progress and [took] some little steps forward [in the championship]. We could have done a few things better, but Ryan was riding awesome in that second moto. We have to take things from where they’re at and I’m pumped to get the win.”

Villopoto’s nine moto wins are the most in the series, and he also holds the distinction of being the only rider to win a moto at every race. However, with his third overall win of the season Dungey has now equaled the overall win total of Villopoto at the season’s halfway point.

“The first moto was tough,” said Villopoto. “I had to waste a lot of energy to catch back up, but we had a great start in the second moto. I was able to ride really good [early on] and get a gap.” 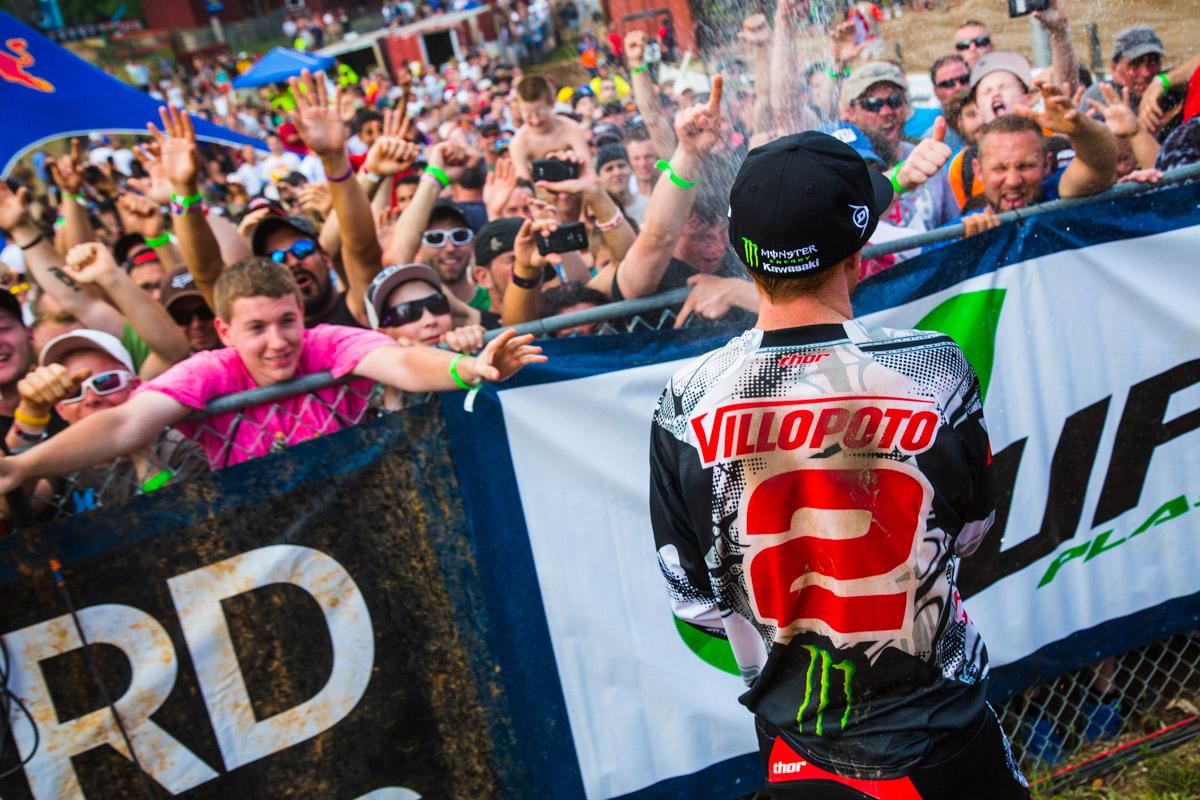 Dungey gained four points on Villopoto in the 450 Class standings, with 12 points separating the pair of former champions.

The action in the 250 Class kicked off with an impressive Motorcycle Superstore Holeshot from GEICO Honda’s Wil Hahn, who extended his holeshot streak to three since returning to competition from injury one week ago. New England native Jimmy Decotis challenged Hahn for the lead early in the moto, while his teammate Tomac made quick work of a top-five start. Championship leader Ken Roczen and teammate Marvin Musquin both experienced trouble in the first corner on their Red Bull KTM machines, completing the opening lap in 11th and 24th, respectively.

Tomac assumed the lead before the completion of the first lap and never looked back. He opened up a multiple second margin over the field and consistently pulled away throughout. The battle for second eventually turned into a showdown between reigning 250 Class Champion Blake Baggett, aboard his Monster Energy/Pro Circuit/Kawasaki bike, and Roczen. The points leader appeared to have an edge in speed on the series’ most recent winner, but a late crash put distance between the duo and allowed Baggett to claim second, with Roczen in third.

Knowing he needed a strong second moto, Roczen narrowly secured the Motorcycle Superstore Holeshot over his teammate Musquin, instantly putting both riders up front early. Both Tomac and Baggett found themselves outside the top 10, forcing each rider battle his way through the field.

Roczen was never challenged for the lead in the second moto and ultimately posted a wire-to-wire performance en route to the win, often maintaining an advantage of over 20 seconds. With Roczen out front, the battle for the overall win was squarely on Tomac’s ability to move toward the front of the field, which he did so impressively throughout the moto, ultimately climbing from 11th to second over the span of 17 laps.

Tomac edged out Roczen by two points to secure the overall, while GEICO Honda’s Zach Osborne completed the overall podium thanks to 5-3 moto finishes. Baggett just missed out on the overall podium in fourth (2-8), after a small crash pushed him to the back of the top 10 in the second moto.

“Once you start winning motos and overalls that confidence just builds and builds,” said Tomac. “It was great to get the overall, but a little disappointing at the same time because of that second moto. I got a good start in the first moto and thought I had my technique figured out, but I got a little squirrely there [in Moto 2] and got shuffled to the back, so I had to fight. It’s really cool to be the last 250 Class winner here at Southwick. This track has always been one I’ve looked up to and wanted to race at as a little kid.”

Roczen maintains control of the 250 Class standings heading into the second half of the season, with Tomac just seven points behind.

“It was really important to get a good start in the second moto and it feels so good to actually do that and have a clear track where I can charge from the beginning,” said Roczen. “It definitely did well for me and gave me confidence. I still had some left in me in those last few laps. I’m just super happy.”

Round 7 of the Lucas Oil Pro Motocross Championship celebrates Independence Day with its annual visit to Buchanan, Mich., and the Red Bull RedBud National on Saturday, July 6th. Broadcast coverage begins with live first motos on FUEL TV at 1 PM ET. Second moto coverage of the 450 Class can be seen live on NBC at 3 PM ET, while final moto coverage of the 250 Class concludes the afternoon on NBC Sports Network at 4 PM ET. All first motos and the second 450 Class moto will also be streamed on AlliSports.com.