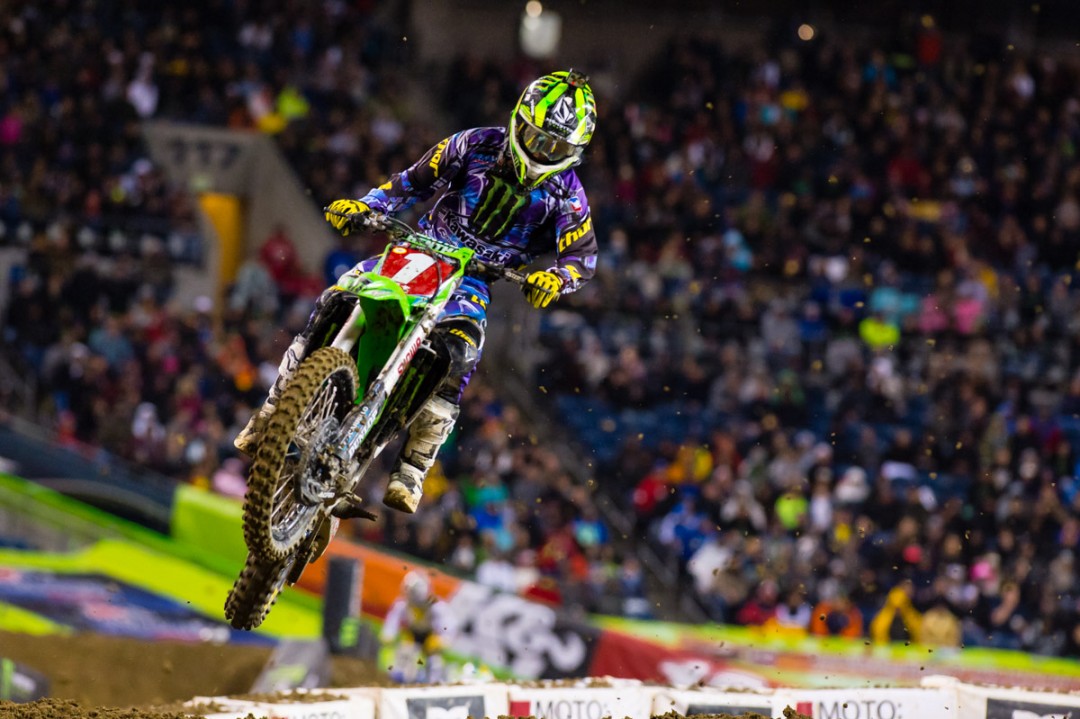 Both Barcia and Villopoto slowly pulled away from Millsaps as the race progressed, setting the stage for a battle to the finish. The Seattle crowd cheered on Villopoto, their hometown rider, but as the duo encountered lapped riders, Barcia’s lead began to increase. 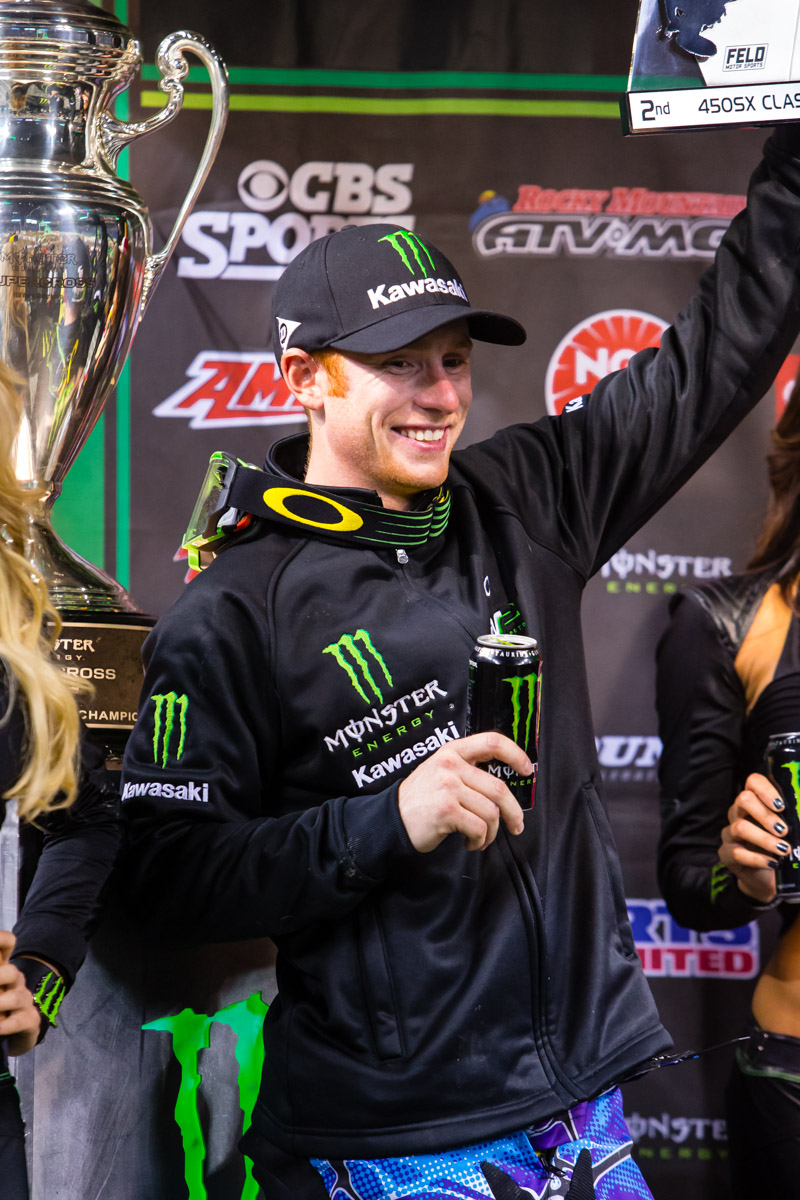 Barcia led all 20 laps of the Main Event, mirroring the performance from his inaugural 450SX Class victory at the second race of the season in Phoenix.

“I tell you what, that holeshot is so key,” said Barcia. “We made some great changes today on the bike. It was a tough track with so many lines, but there was one main line that was so much better than any other. I’ve been waiting for this since Phoenix.”

Villopoto’s runner-up finish extended his podium streak to nine races, during which he has finished either first or second.

“I didn’t get the start I wanted, so to come out the way I did and salvage that was awesome,” said Villopoto. “I rode 20 solid laps but Justin [Barcia] was on it. I just really couldn’t do anything with him. The way it turned out tonight was pretty good for what we were up against [at the start].”

Millsaps finished third for his 10th podium finish of the season, and moved into second in the championship standings. Dungey overcame the incident on the opening lap to finish fourth after starting in 18th position.

Villopoto holds a 25-point lead over Millsaps in the 450SX Class standings and can clinch his third straight Monster Energy Supercross title if he maintains that advantage following next weekend’s 16th race of the season.

In the first Western Regional 250SX Class Championship Main Event since the sixth race of the season in February, GEICO Honda’s Eli Tomac grabbed the Nuclear Cowboyz Holeshot Award and quickly pulled away from the field. Behind him, Rockstar Energy Racing’s Ryan Sipes and Troy Lee Designs/Lucas Oil Honda’s Christian Craig assumed second and third, respectively. Roczen positioned himself in fourth, but moved into a podium spot prior to the conclusion of the opening lap.

With his championship rival behind him, Tomac opened a multiple-second margin as Roczen methodically moved past Craig into second on Lap 2. For several laps, the pair maintained their distance from one another until Tomac came up short on a jump on Lap 9 and was thrown off his motorcycle. Roczen assumed the lead, but Tomac was able to remount in second.

Roczen pulled away for the remainder of the 15-lap Main Event to extend his lead in the point standings. He has finished first or second in each of the seven Western Regional 250SX Class Championship races this season.

“It’s good to bounce back from a bad Heat Race with good start,” said Roczen, who crashed twice in his Heat Race. “I just put my head down and rode smart. The track was really technical out there, with a lot of ruts. It feels good to get a win after such a long break; it’s tough to get in a groove after so much time off, but I’m so happy I was able to walk away with this one.”

Despite his misfortune, Tomac still finished second, but faces a significant deficit in the championship with only two races remaining.

“The track was getting tough in the Main Event,” said Tomac, who still has the most wins in the class with four. “I got a good start and started pulling away, but then I made a big mistake. It’s kind of a bummer, but that’s racing. I was lucky enough to be able to get up in second and still finish on the podium.”

Roczen carries a 20-point advantage over Tomac into next weekend’s eighth race of the Western Regional 250SX Class Championship.

Tonight’s 450SX Class race will air on CBS, tomorrow at 1 p.m. ET, followed by the 250SX Class on SPEED at 5:30 p.m. ET. Monster Energy Supercross travels to Salt Lake City next Saturday, April 27, for the penultimate race of the season from Rice Eccles Stadium. 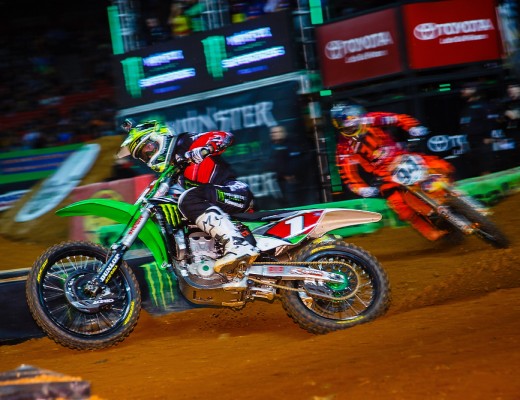 Keeping it constant in Atlanta 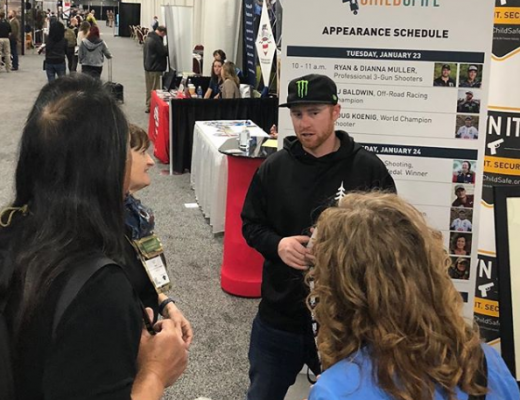 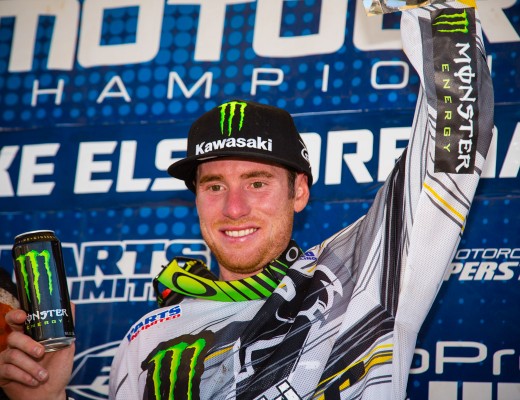