MORGANTOWN, W.Va. (July 6, 2011) – The halfway point of the 2011 Lucas Oil AMA Pro Motocross Championship from RedBud featured an exciting day of action across all three classes of competition, as the world’s best riders celebrated Independence Day with an American Motocross tradition.

Hoping to gain ground in the 450 Class standings, Monster Energy Kawasaki’s Ryan Villopoto was forced to overcome adversity in the first moto of the day, and put forth an inspired ride to claim this week’s Ricky Carmichael Hard Charger Award.

After a solid start in Moto 1, Villopoto looked to put himself in position to move forward, and challenge at the front of the field. However, a slight mistake forced him to the ground in front of many of his competitors. After avoiding additional contact and collecting his breath, Villopoto remounted, sans helmet visor, and began his pursuit of the field. The Kawasaki rider crossed the line in 37th out of 38 riders, several seconds behind the next position on the track.

Despite the early disadvantage, Villopoto promptly surged through the field throughout the near 36-minute moto. He passed several of the class’ top riders like Ricky Dietrich, Nick Wey, Kevin Windham and Christian Craig, and even with the loss of his bike’s silencer, Villopoto kept pushing forward. In the end, he worked his way by an incredible 28 riders to finish ninth.

In Moto 2, Villopoto was determined to make up for his previous error, and subsequently grabbed the lead prior to the completion of the opening lap. From there, he fended off Rockstar/Makita Suzuki’s Ryan Dungey to lead wire-to-wire and secure third place on the overall podium with his 9-1 moto scores.

Villopoto will be presented with the Ricky Carmichael Hard Charger Award at next Saturday’s pre-race riders’ meeting prior to the Spring Creek Motocross National, providing well-deserved recognition for his efforts in front of his peers. 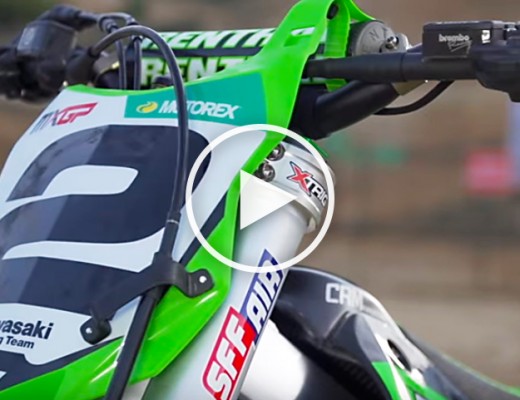